In this article, we will discuss important TECHNICAL TERMS USED IN STEEL STRUCTURE DESIGN. 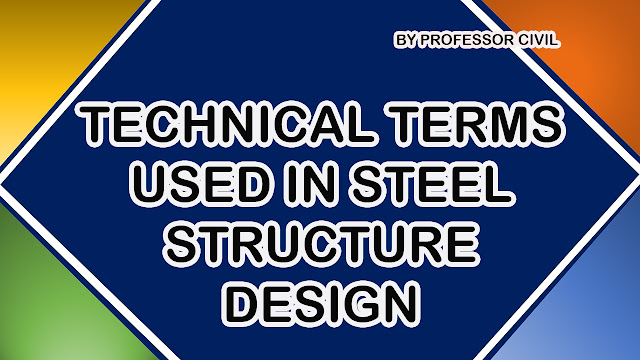 The load on a structure other than the dead load is called live load. The live load changes their position and magnitude with time such as weight of furniture, weight of occupants or peoples. It is expressed as uniformly distributed static load.

The allowable stress to which a structural member can be subjected is called working stress or permissible stress. It may be developed in the member without causing structural damage to it.

When a load is exerted or transferred from one surface to another in contact, the resulting stress is known as bearing stress. It is calculated on the net projected area of contact.

The ratio of shear stress to shear strain within the elastic region is known as modulus of rigidity. It is also called shear modulus of elasticity.

The ratio of transverse strain or lateral strain to the longitudinal strain under an axial load is known as poisson’s ratio. Its value for steel within the elastic limit varies from 0.25 to 0.33.

The strength at which steel fails under repeated application of loads is known as fatigue strength.

The impact strength of steel is the measure of its ability to absorb energy at high rates of loading.

I hope that this article will be helpful in understanding TECHNICAL TERMS USED IN STEEL STRUCTURE DESIGN.